Amelia Rose Earhart keynote speaker. The Captain Jason Dahl Scholarship Fund will host a gala event from 6 to 10 pm Friday September 11, 2015 at the Wings over the Rockies Air and Space Museum, Denver, Colorado. The gathering will bring together aviators past, present, and future as the the Dahl Fund honors the heroes of 9/11/2001 while awarding the 2015 Jason Dahl scholarship recipients. The venue promises to be a great place for retires, new hires, line pilots, aviation enthusiasts, and students alike to meet and greet. Participants can catch up with old friends while making new ones. The museum, which opened in 1994, is housed in the 150,000 sq. ft. historic Hangar #1 built in 1939.The museum’s extensive aircraft collection include over four dozen aircraft and space vehicles. A sample of exhibits include the B-1A Lancer, B-52 Stratofortress, F101B Voodoo , F102A Delta Dagger, F104C Starfighter, F4E Phantom II, F86H Saber Jet, and many other vintage military and general aviation aircraft. 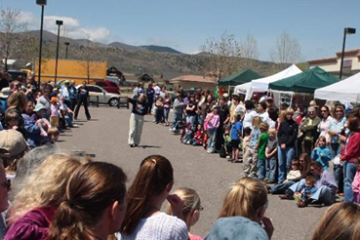 12th Annual Open House and Craft Festival is this Saturday! Join us this Saturday, June 18th from 9am to 5pm at the Sagewood II Shopping Center (10146 West San Juan Way near the Texas Road House Read more…